Italics as a Global Commonwealth

The book Italics as a Global Commonwealth collects and develops some of the considerations expressed at the convention of the same name, held in New York at the United Nations on November 13, 2017.

Opened by a message from the President of the Republic Sergio Mattarella, and by Sebastiano’s institutional greetings Cardi (Permanent Mission of Italy to the United Nations) and Piero Bassetti (Globus et Locus) – promoters of the initiative – and those of Nassir Abdulaziz Al-Nasser (United Nations Alliance of Civilizations), the book contains valuable reflections by Saskia Sassen (Columbia University), Akeel Bilgrami (Columbia University) and Seyla Benhabib (Yale University), as well as testimonies on the Spanish, Japanese and Indian global identity, provided by the directors of New York cultural institutes.

On the Italic cultural identity are the contributions of Piero Bassetti, Davide Cadeddu (University of Milan and Executive Director of Glocalism, the scientific journal co of Globus et Locus), Fabio Finotti (University of Pennsylvania) and Andrea Illy (Altagamma Foundation).

Italics as a Global Commonwealth is published by Giappichelli Editore, also available in e-book version. 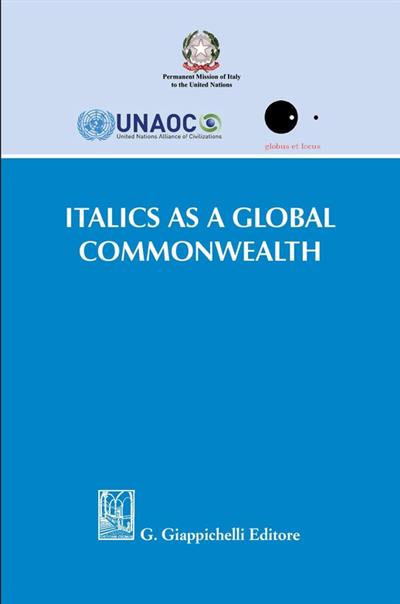